Tip: If the series has an order, add a number or other descriptor in parenthesis after the series title eg. By default, it sorts by the number, or alphabetically if there is no number.

If you want to force a particular order, use the character to divide the number and the descriptor. So, " 0 prequel " sorts by 0 under the label "prequel. Series was designed to cover groups of books generally understood as such see Wikipedia: Book series. Like many concepts in the book world, "series" is a somewhat fluid and contested notion.

A good rule of thumb is that series have a conventional name and are intentional creations , on the part of the author or publisher. For now, avoid forcing the issue with mere "lists" of works possessing an arbitrary shared characteristic, such as relating to a particular place. Avoid series that cross authors, unless the authors were or became aware of the series identification eg. Also avoid publisher series, unless the publisher has a true monopoly over the "works" in question. So much for the story. You know I'm not a fan of actually telling you much of what is happening in the book because you should all just go and read it right away!

I can tell you this much though: Zander, who has played a key role in the first books, will be back. And I wasn't exactly sure if I was excited or not about that, because Zander always represented the past that Quinn left behind. Throughout the book I was a little worried that the story would focus more on Zander than on Quinn and William which they are the main reason I fell in love with this book. But Breeana Puttroff managed to make me wish for a William and Quinn scene and right there it was.

And in case I haven't mentioned this, I looooooooooove those two. Breeana Puttroff has this magical world she created and no matter who the story revolves around, you just cannot stop reading.

This story doesn't solemnly focus on Quinn and William, which might seem a little weird at first, since the first books where mainly about them, but since you just LOVE all of the other characters as well, you don't mind the other storylines as well. And there are plenty of them. It never gets boring, there's always action going on and you always wanna read faster while at the same time just slowing down to not have the end come too quickly. 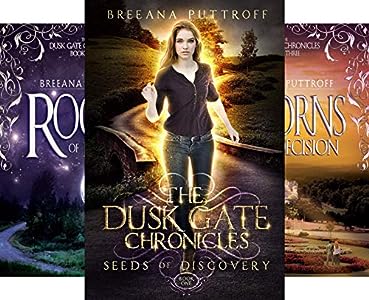 I knew there was going to be something tragic happening in this book. When I started reading, it was clear what would happen, and also that there were only two people in the story this could happen to. Just so you know, I hate it when I'm right, I really really do! With an end like this, I sincerely hope that this is not the last we have seen of this world, because there are lots more things to learn about or to figure out, and I'd really like to have more of this story LOTS more, if it was up to me!

So again, like in my last post already, I urge you to get this series and dive into this magical and beautiful world! Jesus Christ, this author seriously loves babies. Like, really really really loves god damn babies. I'm half-tempted to knock it down to 2 stars just because the overabundance of gushing about how fucking magical and wonderful babies are really got on my nerves.

But I will leave it at 3 stars, because I also understand that I'm just kind of a bitter old spinster. No, but seriously: Babies are so stupid. In other news, the book was pretty slow and felt a bit like a soap opera. I shouldn't be surpri Jesus Christ, this author seriously loves babies. I shouldn't be surprised, the first 5 books seemed to get cheesier with each installment.

I did enjoy the side characters that were highlighted. And I have to say, I was thrilled to finally see a major character get killed. Again, because I'm pretty much a terrible person. I felt like the first five books played it too safe, and nobody important ever got worse than a busted leg. It was nice to see the author make her attempt at a Cedric Diggory moment, and I appreciated that.

Jul 16, Becky rated it it was amazing Recommends it for: Everyone!!! Shelves: books-i-own , on-my-kindle.

I was lucky enough to receive an advanced reading copy of this in exchange for an honest review. First of all, I have to say that this series is one of my very favorites.


I have already read the entire series minus this one several times. I can't get enough. The characters are fabulous. You can help but to love most of them, and even hate a few. This book was so good, it was really hard to put it down to have to deal with reality. I won't spoil it, but it was so good I will be thinking about it I was lucky enough to receive an advanced reading copy of this in exchange for an honest review.

I won't spoil it, but it was so good I will be thinking about it for days. It was so well written that at times I felt like I was really there. I will recommend this book the entire series!


This one had more POV from other characters, which was nice but new. Towards the end of the book I got really hooked…. So I will defiantly be reading the next book!!! Heartening and heart wrenching There we we many times in this story that buoyed me up. I read great words of advice and witnessed the learning experiences that the characters in this book went through. But the heart wrenching experiences they went through left me literally crying for them. I am very much looking forward to the next book hoping I find some good come from all it. Also, I especially hope they catch the bad guys.

Great writing by Ms Puttroff. A tearjerker This was by far the saddest story of the series. I loved it. The series must go on and I am looking forward to the conclusion.